(Older) Championship Chatter – Sudokus and Such

While scheduling the month of June for the site, and considering the potential for some likely downtime or errors while changing web hosts, I budgeted two weeks for recent US championship puzzle discussion. For this week, I’ve planned to cover the US Sudoku Qualifying Test (also the sixth leg of the Sudoku Grand Prix). If you are desperate for new puzzles, those will arrive next Monday at their usual time. But there may be some new challenges revealed throughout this week during the discussion of these creative sudoku.

I figured I’d give a general overview of our design process at the start. As with past years, we (Nick Baxter, Wei-Hwa Huang, and myself) had planned a two-part championship with Classics and near classic variations for the first part, and mostly new or less common styles for the second part. Some of this has been to gauge relative solving capabilities on the challenges that might appear at a WSC, and some of this has been for our own sanity checking of potential competitors. There are more web-accessible sudoku solving tools that can handle “part 1” puzzles and some unbelievable times have been posted there in the past. But less familiar or original styles in “part 2” will challenge anyone solving with certain types of assistance. After the 2009 experiences in Philadelphia at our last live national championship, we know to be extra cautious.

While having two parts was the original plan, the requirements of the Grand Prix changed our design mid-stream and a single big round was used instead. So solvers got 2.5 straight hours of solving to test their mettle. But you can see that the ordering of the puzzles still naturally splits the first ten from the last ten and perhaps many solvers found themselves focusing on just the first part instead of the other.

We like having a mix of puzzles but also a fair number of classic sudoku since a sudoku championship should certainly test the fundamentals. I wrote all 4 of our classic puzzles, each somewhat noteworthy in its own way. Their numbering was maintained in my “construction order”, as testing revealed their mean solve times were within a minute of each other and they would all receive the same point values on the test. I believe only solvers with a very broad skill set would have a uniform performance on the entire set. But just as different test-solvers reported being tripped up by different puzzles, competitors reported the same thing with #2 and #4 seeming to be outliers. I wonder what your experiences were?

I’m posting the first two classic puzzles below, with design spoilers concealed after each puzzle. The next two classics will follow tomorrow. 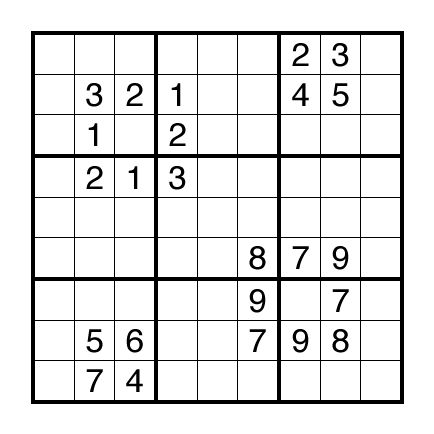 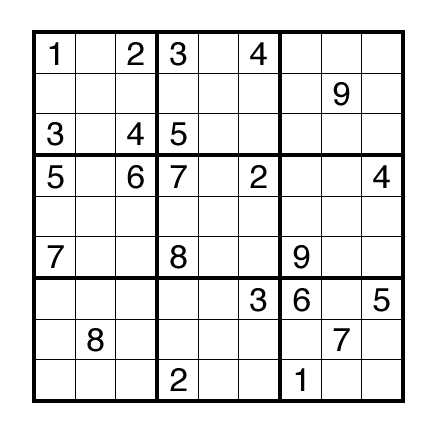 Themes: Both geometric and logical

Design Notes (highlight to view): The first puzzle was designed around a low/middle/high separation and has large squares made out of 1-3 and 7-9 only that provide some symmetry along the solve. For example, consider the 1 in the upper-right corner and the 9 in the lower-left corner which come from looking horizontally, followed by either 79 or 12 pairs to finish those border columns from looking vertically each allowing the last two numbers in the corner regions to be identified. This is probably the easiest of the four classic puzzles but not by much. The second puzzle was designed to require good use of pointing pairs, particularly in the upper-left boxes, involving the “8” and “9” that are lone digits. A relay of these pointing pairs through two boxes should place the first 8s and 9s that cascade to give several other digits.