Archive for the ‘News’ Category:

We’re excited to announce the publication of the third volume of our “Starter Pack” series, Starter Pack 3: TomTom. Like the rest of our Starter Packs, this collection contains a set of easy to medium (Monday to Wednesday) puzzles perfect for solvers wanting to learn a new style or for experienced solvers who want familiar, but not impossible, challenges.

This is a particularly exciting collection for me as it is my first time coming back to make a TomTom collection in many years. While the cover art features my famous first calcudoku from 3/3/09, the book itself contains 36 original puzzles, 18 with operations and 18 without operations. There are also a set of links to Penpa-Edit versions for online solving with answer/error checking enabled.

The next Starter Packs will feature Slitherlink and Star Battle, and we welcome your continued feedback on this series. 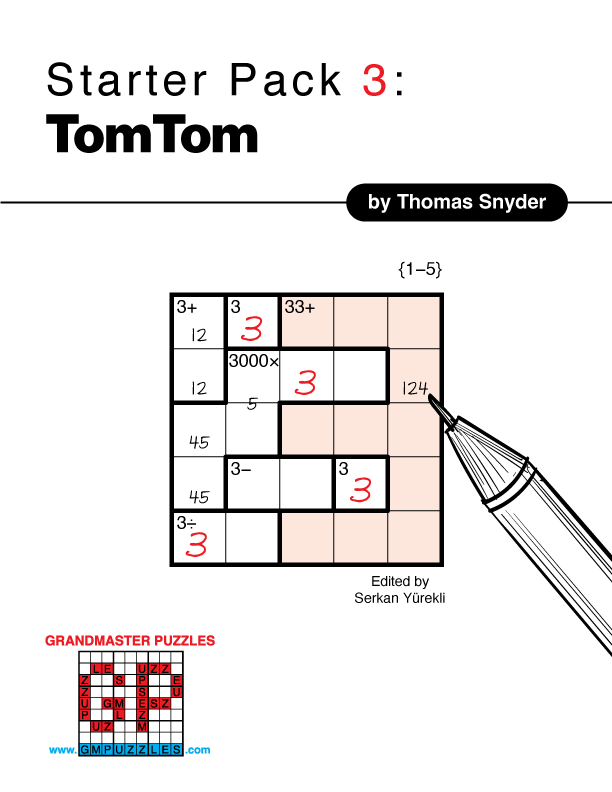 Just released in our e-store is Grandmaster Puzzles Quarterly: Volume 4, our latest collection of original puzzles spanning multiple genres. This volume includes several familiar styles with the first extended section of Japanese Sums puzzles we’ve published, which will also be the style for this upcoming web week.

The full set of elegant and hand-crafted puzzles, coming from twenty-two of the world’s best puzzle designers, spans:

I wanted to share some updates and other thoughts about our solving videos.

1) We have historically released the videos one day after the puzzles are released and still think this is the most rewarding approach so the earliest solvers can’t get help right away on a tough challenge. But we have been putting the updated links on the original posts the next day which make them hard to schedule and requires daily site maintenance. We will now instead be posting the solutions on the following day’s puzzle, but with quick links to those posts for people in the future to find.

2) Also, we are starting to get some other people making these solving videos and not just me. Yes, they will need some (helpful) feedback about microphones and clarity of words and pace of speech and other things, so please be constructive in your comments and not just complain. We’re all trying to share the language of puzzles and even if the words fail to be perfect in a video, the visual images should be enough to help guide you on where to look and potentially how to think to get to the next steps. That the language of a logic puzzle does not need any “English” is what excites me so much in communicating through puzzles.

3) Finally, if you are interested yourself to eventually become a presenter of solution videos for GMPuzzles, please feel free to reach out here. One great way to officially “apply” for this kind of job is to film a video for any of our puzzles that currently don’t have one. If they are good enough, we’ll add that video to our official post and channel and may consider adding you to the GMPuzzles team to do these videos more regularly. There are a lot of others using twitch or YouTube to make solution videos so the standards already out there, people using OBS or other streaming tools to make videos, is our starting point. Not where I was at in 2014 when I made the first video with just a cell phone camera and shaky video and bad lighting. I’ve enjoyed learning how to make more compelling videos without needing an editor and expect some of you might as well so I’m here to help.

We just uploaded a new version of Penpa-Edit tools to the site. The major update with this version is the presence of solve histories which you can also share with others using the “share” button and then “Replay URL” choice. Here is an example link of me doing the Monday Kakuro puzzle. In Solve Path mode it will go through one entry step at a time and at uniform speed. In Live Replay mode, provided you had the clock on, it will show the exact timing of all entries and make the long thinking moments more obvious too. We’re still exploring this feature and don’t yet have an intention to have this replace our solving videos but think the ability to store and share your own solving paths will be neat.

There were also some minor fixes and other improvements that were part of this update. Please share any thought/feedback here as you begin to use the latest version of Penpa-Edit.

I haven’t been able to share more details with you on my mental health recently (not mental illness, although the first being in bad shape can lead to the other!). I wanted to give you all this update, possibly more to come later, as you all watch out for the site and for me.

Over my life, I have managed what I have called hypomanic states that can include (short) bursts of high productivity, creativity, the need to do extensive walking or running to control one’s thoughts, and diminished sleep. This past week, starting ~March 13th and provoked primarily from stresses at my scientific work, was the first time I had a full on manic episode that built over 3-4 days, including the release of an unusual amount of ideas in raw/vocal and short/tweeted form from usually dormant accounts. Over March 17th-20th, for reasons I won’t share here although they don’t involve self hurt/harm or trying to hurt/harm others, I was confined to a psychiatric ward in San Mateo for 72 hours of evaluation. I received both individual and group therapy, and have started to get better but am not yet well. Today, I was released from that facility and have my best friend watching out for me as I get resettled in my San Bruno home. I have an on-going treatment plan including on-going outpatient group/individual therapy and medications that I will be managing.

Most of the above is considered my protected health information, but I am openly sharing it because the discussion of mental health is very poor in the United States and possibly across the world. I’m not interested in hiding what I just went through, but learning more about it and making sure it doesn’t happen again to me and by proxy to others struggling with the borderline of hypomanic and manic states.

Over the coming weeks I will mostly be recuperating, and helping GMPuzzles a bit will be part of my recovery. This business is not profitable yet, but I view it as a big contribution back towards mental health given the numerous other authors and puzzle solvers who find comfort in the logic we put into the world each day. A community of both authors and solvers who may be on the autism spectrum or have dealt with depression, suicidal thoughts, or other challenging things, but been appropriately cautious to share them externally. I’m hopeful that in the coming weeks the visibility of my mental break will help us update how we all try to communicate together, by talking to people rather than talking at people, at least until we understand where they may be coming from.

I will probably be moving all of this discussion forward in other channels like my LinkedIn and not in our puzzle feed so you do not need to engage further if you do not want to.

Thanks for all your thoughts and support through the years but particularly these last few days,
Thomas (aka Dr. Sudoku)

Edited to add: Also see these videos: video 1 and video 2 for a little more commentary about where my head is at.

Edited again to add: Here is a self-contained video analyzing the week of the breakdown, some aspects of how I track my mental health, and more.

Today we’ve released the latest editions in our Masterpiece Sudoku Mix series. Both collections (Tight Fit Sudoku and Consecutive Pairs Sudoku) contain 25 sudoku that are masterpieces of visual and logical style, written by some of the best puzzle designers in the world. If you purchase these books together (or any two mix books with discount code MASTERPIECE), you’ll receive a 10% discount at checkout.

Note: We have not set up a digital solving option for these books yet (we have only started this for the Starter Packs but later in this year should come back). We will likely prioritize certain genres over certain book series when adding digital solving to our existing books, and some types like Tight Fit Sudoku are still in the worse part of interface support in my view.

We’ve just published the first volume of a new series of “Starter Packs”, books with good easy to medium (Monday to Wednesday) puzzles for some of our different puzzle genres. The first volume, Starter Pack 1: Fillomino features one of our favorite region division puzzles and comes with 30 hand-crafted puzzles by Grant Fikes. 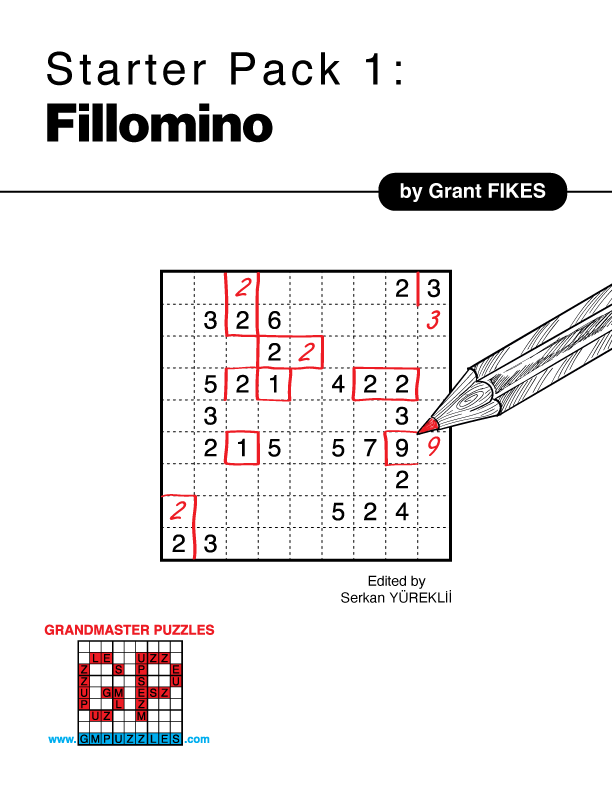 This is also the first e-book from us that includes a set of links to Penpa-Edit versions of the puzzles for online solving. While we are still working to create a more immersive online solving experience in the future, people who buy this book will find a set of 30 web-links at the back to be able to digitally solve all of the puzzles too.

The next Starter Pack will be coming out in a couple months and will feature Tapa by Serkan Yürekli.