Championship Chatter – How Many Roads …?

I received a lot of “pre-criticism” about having made a Counting Puzzle for the USPC. I have been rather outstated as a solver in not liking these puzzles because of the difficulty of confirming one’s answer — particularly in the old -5 point days for a mistake that would frequently cost me for even attempting and getting close to the right answer. And I often don’t get the choice to skip it when I’m close to finishing the test.

But that doesn’t mean I’ve never been called on to write Counting Puzzles. I wrote a GAMES article/Puzzlecraft chapter on the topic. And I gave it another attempt on this USPC. Call it an experiment to see if I could make anything my audience would accept as a good puzzle.

My first concept was to make a heavy path puzzle with lots of forced segments due to arrows, but not a single solution to give it a “counting” aspect. While I figured good solvers would be able to get to a “trivial” state to count a handful of total paths, all of my initial designs ended up feeling more like a broken path puzzle than a good counting puzzle so a changed goals slightly. I wondered: can I make a few very simple counting challenges work together with some simple math to be a fair challenge. Basically, something where good observation could reduce the problem into something much more tractable. And if this is testing both observation and problem solving skills in an unfamiliar setting, all the better.

Even with the “simple” format below that even had the surprise of very basic multiplication built in, the successful answer rate was quite low compared to my own expectations. And at least one solver has complained about getting 99.991% of the correct answer and getting zero credit. In my evaluation, with three small counting puzzles and a meta puzzle of building the math equation, that answer is 75% correct in the same way some of the answers in the 52k range were. All from counting one of the component puzzles one lower than expected.

So, did you think this was an appropriate USPC challenge? Did this soften or strengthen opinions against counting puzzles? Are counting puzzles still the brussel sprouts of the USPC buffet? I’ve only heard positives from people that actually got the puzzle correct so I do have to think score results often bias counting puzzle reviews (my strongly negative reviews have certainly followed my average score of -5 on these puzzles over the years). 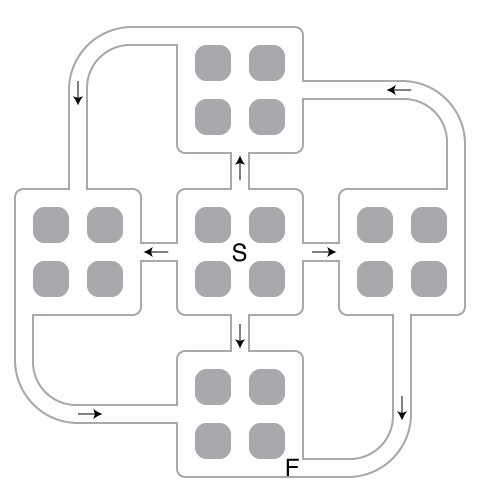 Rules: Count the number of different paths from Start (S) to Finish (F). You cannot use an intersection or a path segment more than once. Path segments with arrows can only be used in the indicated direction.

Answer String: For the USPC, the answer string was the number of paths. For this week, you can just hit the solved button on an honor system if you think you’ve solved it.

And if you want an extra challenge, solve this bonus puzzle where an arrow has been removed. It’s one step up from the original puzzle but should be just as simple to break into constituent parts if you’ve mastered the first.