The hardest puzzle I wrote for the USPC was originally intended to be presented as a subtle “surprise”. The rules would have covered what thermometer shapes do (strictly increase from bulb to flat end), but would not have been explicit that those shapes could reach outside the grid. So finding a grid with no external numbers but with many external shapes would have been a manageable but perhaps unexpected surprise. But it was decided to just be explicit here, and with some other authors in the last few months having used the same external clue ideas with skyscrapers (including myself here with an Even/Odd Skyscrapers after I knew the fate of this puzzle) it’s not clear if this would have been unexpected anyway.

I thought this was an interesting extension of some inequality skyscraper concepts I’ve seen elsewhere. My first attempt at this puzzle type was judged very elegant and far too hard. My second attempt kept one of these two traits and made it onto the test. Like the TomTom, this variation seemed to get pretty good reviews, but I do know some solvers who fell into the trap of thinking an outside number blocked that number from appearing inside the grid. 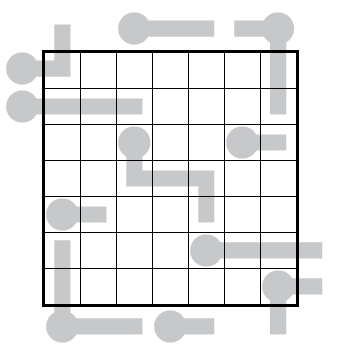 Theme: No given numbers, and full clue cell symmetry

Rules: Standard Skyscrapers rules. Also, as in Thermo-Sudoku, digits must be strictly increasing in all thermometer shapes from round bulb to flat end.

Answer String: For the USPC, the answer string was the internal cells in the 4th row and 7th row. For this week, you can just hit the solved button on an honor system if you think you’ve solved it.