People always ask me how to solve puzzles and fast. My first answer is practice, practice, practice! My second is notation, notation, notation! After that, I say learn how to construct interesting puzzles and run through more involved logical deductions than most puzzles tend to have. In this column I intend to dissect some of our Grandmaster Puzzles with such interesting properties and at the same time reveal ways I look at puzzle styles that might help out in the future. This week’s topic is the Thursday TomTom, advertised at medium-hard difficulty, that few solvers beat in an expected time. While it shouldn’t need saying, SPOILERS AHEAD!

“Basic” TomTom global steps, specifically that the total sum is 21 for all rows in a 6×6 puzzle, should get the solver to this position. Also, while this is a NoOp puzzle, all the 13’s are clearly + cages. 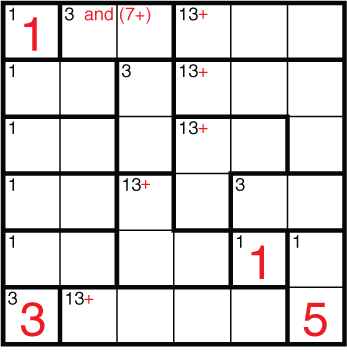 A similar early observation is to see that all two-cell 1 cages are subtractions (try to think of a counter-example). In fact, this NoOp puzzle is turned effectively into an Op puzzle very quickly. Only three 3 cages have any flexibility, the top one is resolved quickly, and the other two can be resolved much later in the solve.

The key to this puzzle is to consider the unusual grouping of four 1- cages on the left side collectively.

(Aside: “Uniqueness” — making a deduction because the consequence of any other possibility is to have more than one solution — is a useful concept for speed solving but typically frowned on from a standpoint of mathematical rigor because such steps do not conclusively prove there is just one answer. I’d say they “feel bad” as a solver, almost like cheating. Not cheating in the “Eugene” sense, but maybe cheating oneself out of a better experience. Still, sometimes discovering them is an unexpected Aha moment and that is what many people commented on with this puzzle, getting a 6 in R6C2 much sooner by doing so. Why did they feel comfortable using uniqueness here? Well, I know how to write valid puzzles. Grandmaster Puzzles only have 1 answer (free t-shirt to anyone who first reports a mistake on this front), so this is a special and trusted puzzle setting where uniqueness probably feels even worse to use but will always get the right job done quicker.) 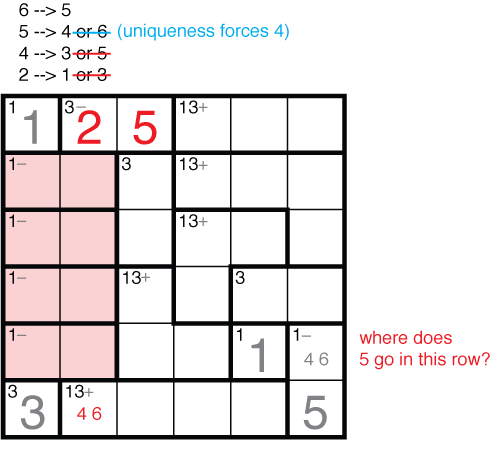 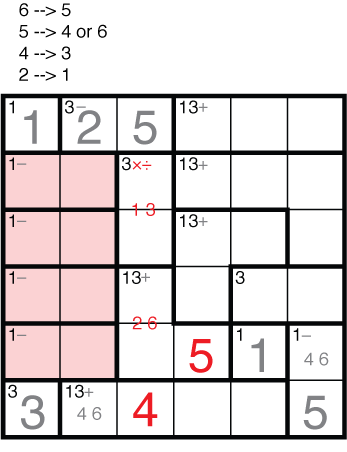 I hope this is a revealing look at what is a quite unusual TomTom. While our puzzles may get hard, there is always an interesting logical route and the discovery process will be worth persevering through. So use uniqueness, (or even worse “guess”) at the risk of compromising your own enjoyment! Some get joy from solving puzzles very fast. Others from solving very good puzzles. Some from both. Choose your own path through these Grandmaster Puzzles.