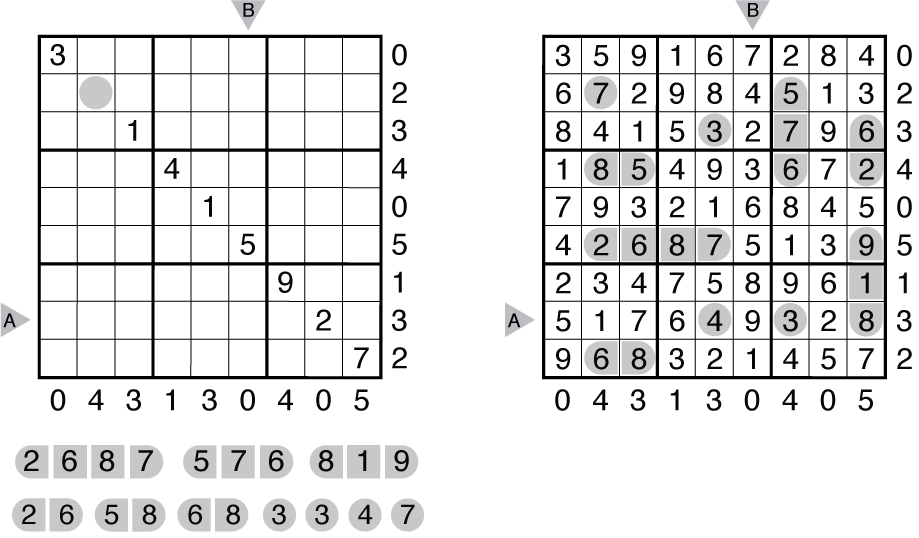 Rules: First see standard Sudoku rules (insert a number in the indicated range into each cell so that no number repeats in any row, column, or bold region). Also, standard Battleships rules.

Locate the given fleet, as in a Battleships puzzle. Each ship segment is numbered and these numbers must fit into a valid sudoku solution as well. Ships can be rotated when positioned in the grid, but different ships cannot be placed in adjacent cells that share an edge or corner. The clues outside the grid indicate the number of ship segments in that row/column. Numbers inside the grid at the start should be treated like “seas” and cannot belong to ships in the fleet.

(Brief) History of Battleship Sudoku: Descended from Sudoku and Battleships puzzles. Battleship Sudoku was first created by Thomas Snyder for his blog The Art of Puzzles in 2006, and formed the basis for his first book of puzzles.

History of this example: This “Easy as Pi?” Battleship Sudoku was one of the harder early examples written by Thomas Snyder for his blog in 2006.