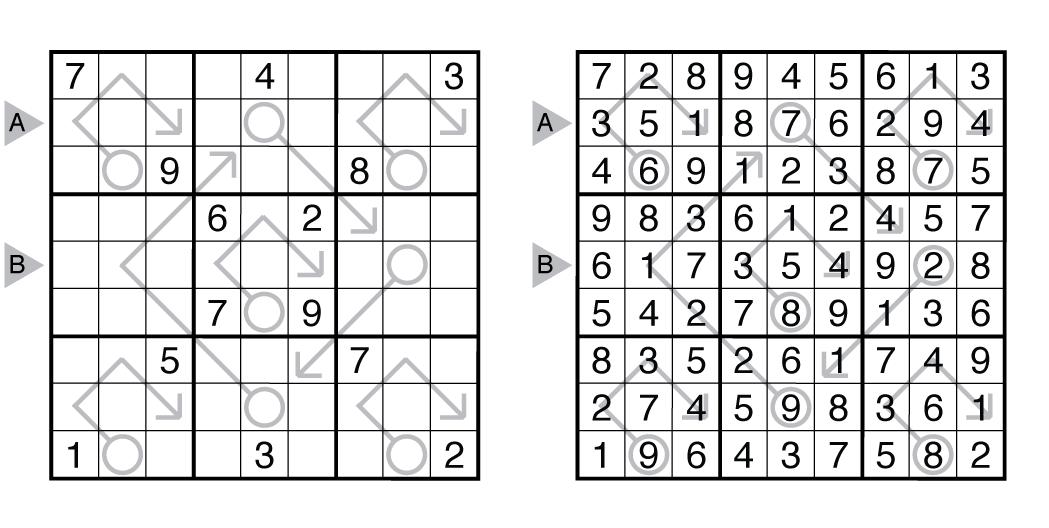 Rules: Standard Sudoku rules (insert a number in the indicated range into each cell so that no number repeats in any row, column, or bold region). Some arrow shapes are in the grid; the sum of the numbers along the path of each arrow must equal the number in the circled cell. Numbers can repeat within an arrow shape.

(Brief) History of Arrow Sudoku: Descended from Sudoku and arithmetic puzzles. Arrow Sudoku is a Japanese nanpure variation, likely created before the return of “Sudoku” to the West. (If you know more about the original author/publication of this style, please tell us).

History of this example: This Arrow Sudoku was written by Thomas Snyder for the 2010 Hungarian Sudoku Championship.

Design rules for contributors: A Grandmaster Arrow Sudoku will have a unique solution that can be reached by logic alone. Generally, a Grandmaster Arrow Sudoku has a symmetric layout of numbers and arrows or a visually interesting theme that does not need symmetry. Arrows can exit and reenter the grid, and on rare occasions cross other arrows or circles provided it is clear what each component arrow is. Multiple arrows can arise from a single circle. Given numbers should not appear anywhere on the arrow shapes.