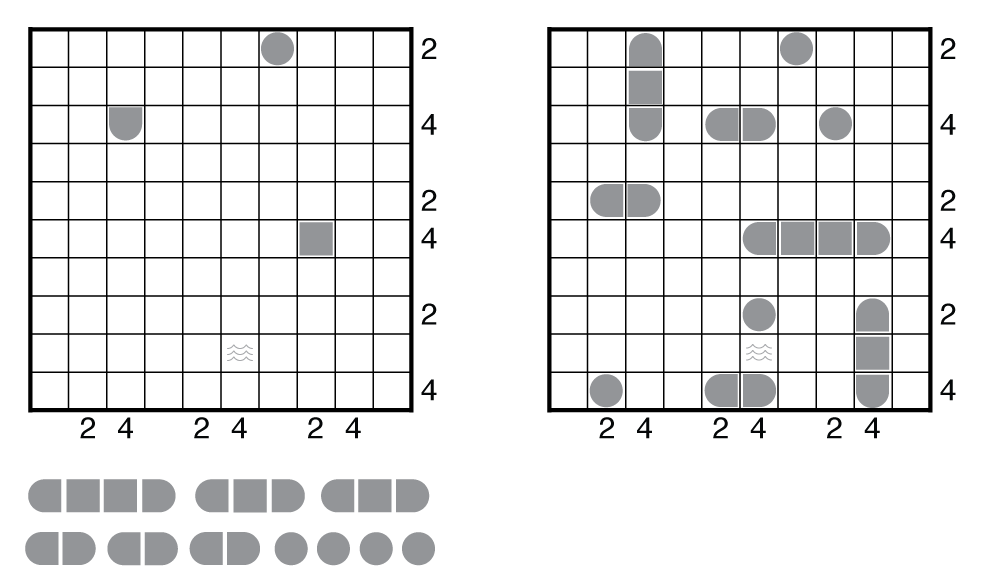 Rules: Locate the indicated fleet in the grid. Each segment of a ship occupies a single cell. Ships can be rotated. Different ships cannot be placed in adjacent cells that share an edge or corner. Some ship segments, or sea cells without any ship segments, are given in the grid. The numbers on the right and bottom edges of the grid reveal the number of ship segments in that row or column.

Answer String: For each row from top to bottom, enter the number of the first column from the left where a ship segment appears. If the row is empty, enter 0. Enter these numbers as a single string with no separators. This example has the key “3330260692”.

(Brief) History of Battleships: Descended from object placement puzzles. Battleships was first published in 1982 in Argentina in the magazine Humor & Juegos. The original developers were magazine founder Jaime Poniachik and several other members of his editorial team. Battleships gained worldwide attention at the first World Puzzle Championship in 1992 in New York City, and has appeared regularly since then in puzzle magazines around the world.

History of this example: This “24”-themed Battleships was written by Thomas Snyder for the 2012 24Hours Puzzle Championship in Hungary.

Design rules for contributors: A Grandmaster Battleships will have a unique solution that can be reached by logic alone. Standard grid size is 10×10, but other sizes are possible. Outside clues may be completely given or certain rows/columns can be left blank.