(I still have a massive backlog of things to do since my move because I’m really dedicating most of my time and energy to my new position with Google Life Sciences. So for those looking for more site updates, you’ll still need to wait. For now I can finally write up a report on our Hidden Contest from late March.)

John Bulten’s debut week was quite ambitious and challenging even before considering the equally ambitious and challenging hidden contest that ran through the entire week. Every contributing grandmaster is given complete freedom to design a debut week of puzzles. Despite this freedom, a certain theme has come up each time. This inspired John’s hidden contest. Read on to see what was going on:

The first unusual thing solvers should recognize during the week is a set of italicized sentences throughout the puzzles that don’t really require italicization. Pulling out the italicized bits gives these sentences:

Schedule: 1. This week features puzzle overlaps where different styles work together
BACA: 2. Enter a nine-character string
Litro: 3. Identical shapes … touch along common borders
Litro: 4. Characters include both numbers and letters
Slithersweeper: 5. Convert these cells’ contents to numbers (use corresponding cells in additional grid)
Fillomino (Symmetry): 6. Use both digits for any two-digit number
TAPA (Pentomino): 7. Use CAPITAL LETTERS
Hidden Shape: 8. They can touch but … overlap
Wrap-up: 9. All copies will be personally signed by J.B.

These “instructions” can be roughly assembled into a set of meta-instructions to the hidden contest.

[[And hint #1 gives an explicit ordering 138956247 that looks as follows:
Instructions: This week features puzzle overlaps where different styles work together. Identical shapes touch along common borders. They can touch but overlap. All copies will be personally signed by J.B. Convert these cells’ contents to numbers (use corresponding cells in additional grid). Use both digits for any two-digit number. Enter a nine-character string. Characters include both numbers and letters. Use CAPITAL LETTERS.]]

Even ordered, the instructions will be insufficient without viewing the puzzle solutions. The key concepts are “identical shapes” and “signed by J.B.”; looking at the solutions long enough, perhaps from far enough away, solvers may recognize a 9-cell “jb” pattern that occurs in each solution. [[Hints 2 and 3 suggested considering other debut weeks; in each there have been author monogram puzzles.]] Because the pattern is revealed in many distinct ways across the puzzles, it is easiest to see in the loop and shading puzzles as shown on the left side of the image below for the BACA (group of shaded cells), Slithersweeper (group of unused cells), and Tapa (group of unused cells). The jb parts of the other solutions are also highlighted below. 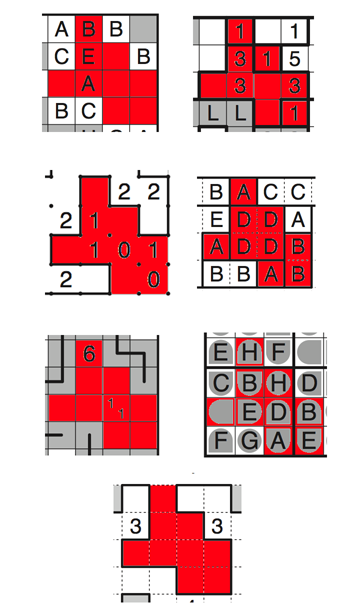 To get to a final solution code, these 6 (or 7*) copies of jb must be combined together to build an answer string. Using a method typical for puzzle sets with overlapping grids, the values present in each of the 9 overlapping jb cells should be converted to numbers (if needed) and then added together. In normal English lexicographic order (top to bottom, going left to right), these values are 18, 15, 13, 1, 14, 19, 8, 2, 8, which is an incomplete solution. Yet converting these all to letters will reveal ROMANSHBH which isn’t quite right either.

The instructions make it clear the answer is a mix of numbers and letters, so taking the sensible ROMANS and keeping 828 givens the final answer “ROMANS828” or Romans 8:28, a verse on things working together that is somewhat appropriate for this contest: “And we know that all things work together for good to those who love God, to those who are called according to His purpose.” [[As hint #1 said, it’s all good.]]

This is the hardest puzzle we’ve run on the site, and looking back it is clear it still has several rough edges (some examples: the puzzles all use alliterative titles that are “noisy” as they are not used in any context within the contest; the instruction gimmick has some bold words to cancel them from italicization; …). To the extent solvers ran down some rabbit holes, I’ll accept the blame for not doing a good enough job as editor.

*Patrons received a 7th puzzle this week, a Cavestream. While it contains a jb mark as shown above, all of the interior cells are blank. So it does not affect the final entry code but may have helped in identifying the concept of the week.