Here are the final puzzles from the US Sudoku Qualifying Test that I wrote. Both are less common types. Tomorrow will finally bring some new puzzles, and I hope some surprises too.

The first of this set, a “Seek-and-Spell” variant, is a style that took on a life of its own on this website a few months ago as more and more constructors kept submitting it. I wanted a very United States sort of puzzle somewhere on this test and found a good letter set to get 5 states into this grid. I wanted OHIO from the start as an easy Seek-and-Spell rule placement. But the value of states like MONTANA and INDIANA became clear during construction. This may have been the only case on the test where some non-sudoku logic puzzling skill would really accelerate the solve as the Seek-and-Spell placements are quite limited and getting them fixed makes the rest much easier.

The second of this set is a style I first created for a Czech/US Sudoku Championship several years ago and one that I keep bringing out every year typically for championship season. It is one of the easier styles construction-wise to get started with creative themes as it does not take a lot of digits in either grid before the linked cells really start to force the solve. But occasionally getting both grids to behave by the end can be hard. Here, my seeds were two different styles of basic step in the two grids. And after finding the linked regions, consistently ping-ponging between the two puzzles to get to the end. It is another of my favorites on this test.

Not posted this week were the great submissions from Wei-Hwa Huang. This year I gave him a sketch of the styles I wanted and he delivered in a large way. For example, I had a basic concept to play with Binary in a 6×6 grid with missing digits much like the Indian GP test had a play on this with Braille. Wei-Hwa took it farther than I did though with 0-7 and three bits being a perfect choice and his example and test puzzle were both quite fun. The Property Sudoku also had quite an elegant solve and his Diagonal had a good, but fair, challenge. 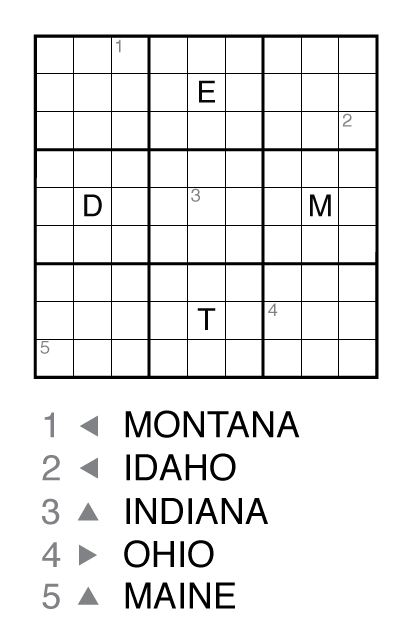 Rules: Standard Sudoku rules except that instead of the numbers 1-9 this puzzle uses the letters ADEHIMNOT. Also, clues in the grid represent typical “Seek and Spell/Kanaore” clues; specifically, it must be possible to read each of the words/phrases listed below the grid by starting at the indicated number, moving one cell in the direction indicated by the arrow, and then continuing to move one cell at a time up, down, left, or right to complete the word/phrase. No cell may be used more than once in a single path, but the same cell can appear in the paths of different words/phrases.