Today’s surprise comes from Tyler Hinman, five-time winner of the American Crossword Puzzle Tournament and author of Winner’s Circle Crosswords. I’ve had the pleasure of co-solving with Tyler — whom I call “Kid Crossword” when in “Dr. Sudoku” mode — on many puzzle hunts in recent years and we’ve had a number of good conversations on puzzle design. Total Masyu, which appeared again this Tuesday, for example was an idea that came up in one such chat from Tyler that I constructed for my blog.

As I heard from Tyler a few months ago: “Here’s a weird idea I had the other night while unable to sleep. … It’s inspired by the Spy piece in Stratego, which wins a battle if it attacks the highest-ranked piece (the Marshal), but loses under all other circumstances.” The concept was for Spy Futoshiki, the subject of today’s surprise, where the lowest value (1) is considered greater than the highest value (5), but all other inequalities obey normal ordering. It’s a clever idea and Tyler’s provided a very nice puzzle to demonstrate the change. 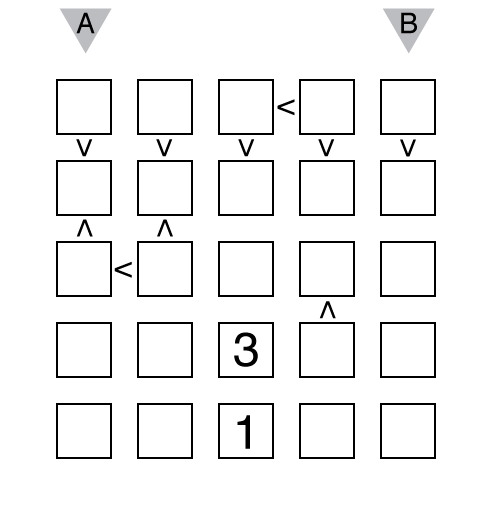 Theme: Spies among us

Rules: Insert a number from 1-5 into each square so that each number appears once in every row and column. Inequality signs between the boxes indicate the larger/smaller numbers, with the single exception that the number 1, the “Spy”, is considered larger than the number 5 if in adjacent cells.