Most Puzzle Hunts — sometimes called Treasure Hunts but the overlap is not perfect — involve solving puzzles to find a prize. They are an adventure where the puzzles tell you where to go next. Usually each puzzle solves to a word or phrase. In some hunts, the answer could actually be the next location like “FOURTH AND MAIN”, an intersection of streets. In others, there might be a different mechanism to take a more regular answer word like “IVORY” and turn it into spot 12 on a map. Perhaps there is a crossword clue for site #12 on the map that says “Key ingredient” and that fits pretty well when you think of a piano key. If crossword clues aren’t for you, perhaps you give solvers a list of instructions to perform on the answer words. Maybe something like “take the longest intact roman numeral in the answer and multiply it by the number of other letters” to get 12 as well from IVORY. Make a map with lots of numbered places, only a subset of which will be visited, and you have the framework of a Puzzle Hunt.

But this is talking about the logistics of a Hunt and not what a Hunt puzzle is like. While you can make a hunt out of simple riddles and shaded cells in crossword puzzles — and this is exactly what many “Treasure Hunts” do — the puzzle community in places like San Francisco and Seattle has a very different view of what a Puzzle Hunt puzzle is like. For that definition, I want to take something Mike Develin contributed to a Bay Area puzzle hunt mailing list last year that fits perfectly:

Now imagine you aren’t told what words to look for.

The essential quality of a Puzzle Hunt puzzle is that it stretches your mind in unexpected ways. It may look like one thing but probably solves as something else. Most of the time it will not replicate a puzzle experience you’ve had before (but there are only so many ideas in the world so this, in practice, is hard to achieve). Puzzle Hunt puzzles almost always present you with a lot of data, be it a grid of letters, a set of images or sounds or smells, or even something in the environment around you at the location where you find the puzzle. Transforming the data down to a single word or phrase is the basic goal of a Puzzle Hunt puzzle, but what that involves is rarely spelled out clearly at the start.

See, Puzzle Hunt puzzles almost never come with instructions and certainly not with clear instructions. Sometimes they have vague hints or partial messages along the way but sometimes they have nothing at all. Figuring out what to do is often a large part of the fun. The AHA moment — when an indecipherable image suddenly starts to show some reason or when a string of gobbledygook starts to actually resemble words given a new frame of thinking — is the joy that these puzzles frequently provide. Puzzle Hunting is my favorite form of collaborative puzzle solving by far as it often requires quite different perspectives to see everything you need to in a puzzle.

I play in about a half dozen puzzle hunts every year. Some are only hosted in one place so those not in the Bay Area might miss an event like BANG (I led the construction of BANG 23 which featured a mix of puzzles including logic puzzles that actually built the map). One recent hunt, DASH or “Different Area, Same Hunt”, however aims to host the same event in over a dozen cities. While this format loses something in environment specific clues which are some of my favorite puzzle hunt clues, it gains a lot by making puzzles of this style accessible in many more places. This year’s DASH is even going international with a London hosting in addition to many in the US. And not all Puzzle Hunts are played on foot. Some take place in vans over the weekend. Others involve much less travel like the MIT Mystery Hunt that is more of a “conference room” game where you have a ton of puzzles to solve but it is not as much about getting from point to point but about cracking “meta-puzzles” built out of many other puzzles. Winning the Mystery Hunt means writing the next one; I made the “mistake” of winning the Mystery Hunt the first two times I played with a team of about 25 which is actually small for the MIT Mystery Hunt (must puzzle hunts have teams of about 4-6).

Puzzle Hunts of all sizes allow for a lot of creativity on the part of the puzzle constructor; they are where we can break the rules most. A good number of the puzzles I’d judge as my own favorites amongst the thousands I’ve written are those I wrote for puzzle hunts: “Rewriting the Record Books” from the 2007 Mystery Hunt is near the top of my list although it is insanely difficult and requires you know a lot about American sports history. You are allowed to require certain knowledge from your solvers with puzzle hunt puzzles which separates the style a fair bit from most of the logic puzzles here. Slightly more approachable but still difficult is the “KenWord” puzzle from BANG 23. This puzzle is from a Hunt where the main villain imagines a New York Times puzzle page where the Crossword and KenKen have come together to form the ultimate single puzzle. How this helps him take over the world is unclear, but a one-of-a-kind mix of these types gives a satisfying and similarly one-of-a-kind experience.

So that discussion brings us to our first Puzzle Hunt-style puzzle at Grandmaster Puzzles, an easy one as these things go.

Last Monday, when I was supposed to give you a Sudoku based on my (unannounced but predictable) schedule, I gave what looked like a Word Search instead. One which would, according to the Rules and Info, “have a unique solution that can be reached by observation alone,” a slight play on our normal formula. After identifying the grandmasters in standard fashion, the solvers would see this. 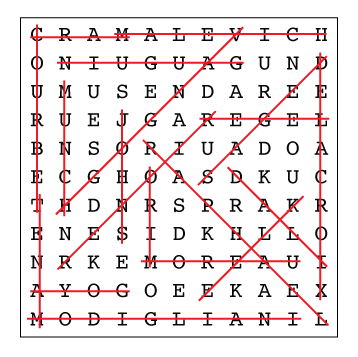 Notice that the leftover letters in order spell “UNUSEDAREASUDOKUDSRNDKKEOEKA”. Which can look like a lot of gobbledygook but hopefully “SUDOKU” is a key word to recognize to eventually give the partial message “UNUSED ARE A SUDOKU” at the start and then still just gobbledygook at the end. Here the solver must take a small leap. While the word search is 11×11, the remaining letters are part of a 9×9 group. And there are 9 unique letters. So they can be placed on a standard classic sudoku grid and solved as a more expected Monday puzzle would be. 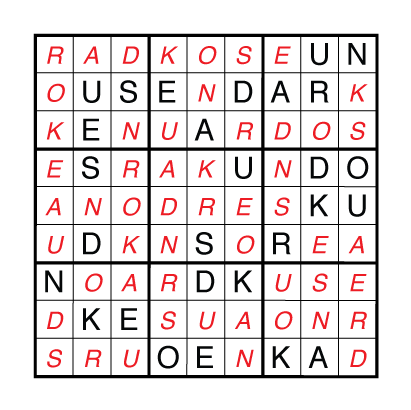 Finding a unique solution is very strong confirmation you’ve done the right thing, but in true Puzzle Hunt fashion you still need to find a single word or phrase from this puzzle. Which is kind of a word search like where the puzzle started. There are about 20 good hiding spots in a sudoku — the rows, the columns, and the main diagonals — and the last two are the best most of the time as you can repeat letters in an answer, hiding it from people who can anagram sets of letters. The main UL-LR diagonal hides “RUNAROUND” on it, which is a kind of puzzle found at the MIT Mystery Hunt. It is also how you might feel after going through so many steps without instructions, except that the process of puzzle solving can be fun whatever the reason you are doing all these assorted tasks. So I gave you the RUNAROUND on Monday, and for that I hope I need not apologize.

I promise to have more puzzle hunt-y puzzles here in the future. I may tell you when they are coming. I may not. But I intend to have all the puzzles types I enjoy here eventually. From the good reception I got on Monday, it seems a lot of you like unexpected surprises too.