Sixth in a series with puzzle solving tips. This time with advice on both solving and constructing skyscrapers puzzles.

I’ve gotten a lot of requests for tips on how to construct puzzles. I don’t offer many online as I have a monthly column in GAMES magazine that covers this and I don’t like competing with myself for less money. But Mike Selinker and I have improved on that content recently in turning our columns into a book, Puzzlecraft: The Ultimate Guide on How to Construct Every Kind of Puzzle

. Please check it out.

This week, I thought I would give some insights into how I made this puzzle. Since I often construct a puzzle by thinking in the same way that I would solve the puzzle, the images below will show you both how I made the grid (and when I needed to use certain clues) and also how solvers likely completed the grid (and when they needed to use certain clues).

Twos are my favorite clues in skyscrapers because they can serve a lot of different roles and don’t give away too much information. I thought I would make a puzzle with every other clue given, but mainly 2s to 4s, as 1, 5, and 6 are less interesting clues because they do too much.

I started by drawing a grid and marked the spots that would get clues with question marks. I knew none of them would be 1’s, so the tallest buildings could not sit directly in front of a ?. I then put some outside 2 clues to hide the first deduction. My starting construction grid looked like this: 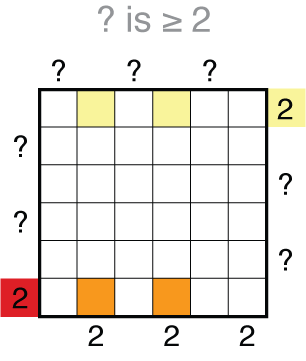 For solvers, the logic should go “a 6 needs to be in the top row (yellow), but wherever a 6 goes a 5 has to go down below (orange).” 2’s can never have a 5 in the second spot after the clue. Which means there is only one choice logically for where the top 6 goes which places 3 digits and some inequality signs in the grid. 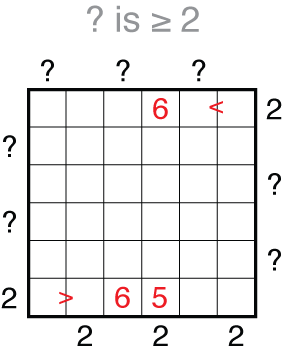 Two clues are interesting because they always create a tension in the grid. When only two buildings are seen, the first cell must be a number bigger than all those after it until the largest building in the row/column. In this puzzle I wanted to set up a really big tension based on the second column 2. To do this, I put in two 4 clues that would force some other 6-tall buildings into the grid. 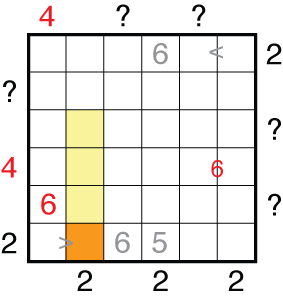 Now, the solver must notice the problem in the second column is that the lowest cell can be at most a 3, but the closest spot for the tallest building is three cells away. So it must be a 3, 12 in some order, and 6, reading from the bottom. Putting in those deductions forces buildings in the sixth column where that 2 clue is also now stranded and needs to be the largest option left (a 2) and have a 6 placed as close as possible. 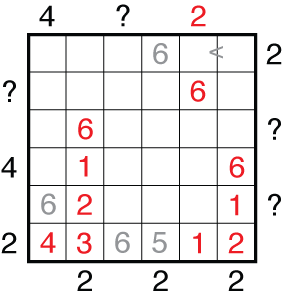 These two deductions were the major ones I wanted to place into the puzzle, and are the main solver lesson today about 2’s. But I was not done constructing the puzzle so let’s show you how you do that.

Some more logical deductions can be forced in the grid, particularly by the 4 clue in the fourth row, to get to this state. To get very good at constructing you’ll need to be very good at determining when you have made all the progress that is possible even with quite involved logical steps. 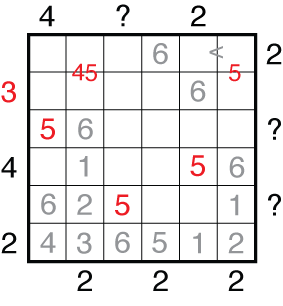 I did not want big clues like 5 if I could help it, so I placed a 4 in the fifth row instead as the smallest option left for that outside clue (since a 1, 5, and 6 will be seen). This also has a nice side-effect in the 4th row that gives you the whole first column (notice if a 3 went into the third cell you would have 2,3,4,5,6 all visible!).

Then I dealt with a bigger problem. Look at rows 1,2 and columns 2,6. The 45 and ?5 can become a problem if the unknown number in the sixth column is also a 4. I have no clues that can force one order there, and without such a clue I would end up with 2 or more solutions. So I really needed to get a 4 into the third row in column 6. Fortunately, there was an easy clue that could do this. For the solver, seeing that 2 will give a very easy deduction for a 4, but as a constructor it was even more valuable as I was building towards just one solution by putting it in there. 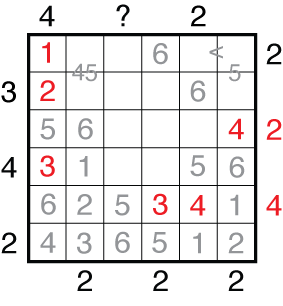 Now, a lot of the grid is specified and only one clue is left. Sometimes you get into this state and have no way to specify a unique grid but I was fairly sure I would be ok with this smaller 6×6 puzzle. You can actually explore all the options, as I show below, to come up with different puzzles. Only a 3 or a 5 work here, but I wanted smaller clues and used the 3 as the obvious best choice.

I then resolved the whole puzzle from the start to make sure my two hard steps in the early images were *required* in the puzzle with all the clues. While I had to use them when the clues were ?’s, the solver will have those numbers. What this means is that while your puzzle will only be as hard as you set out to make it, it can actually become much easier when the clues you weren’t considering at first now exist in the final form. This is particularly a problem with puzzles like sudoku where hiding that cool “X-Wing” step can be defeated by some simple singles that the last few digits allow. So test and tweak is the rule.

Fortunately, when I solved my puzzle again, the hard steps were still needed. If they weren’t, I would have gone back to the start and tweaked some of the early decisions. For example, I could have put a 3 in row 4 in that early step where I forced the 6’s. This would be a slightly different puzzle space, but still include my two early deductions.

Writing good puzzles often starts by being able to solve very well and learning what kinds of clues set up creative deductions. I write puzzles in the same way I solve them, by adding in a clue or two at a time until I get to the end. Sure, there are specific tricks you need to know in all the styles, and for that I’ll point to my forth-coming book, but this gives you a general taste for the process and some specific tips for Skyscrapers.