Here are our best Shading puzzles of 2018, selected from the 59 web posts in this category (our most common category, just barely). We had a lot of great Shading puzzles throughout the year and here the best choices were more closely grouped together:

2018 marked the start of Serkan Yürekli doing a lot more work editing and helping the site in other ways. One of these additions was bringing in a lot more puzzle authors including some of our youngest contributors to date. Guest contributor Yunus Emre Büyükkale received a best of prize for this 1ST-themed LITS on the site. 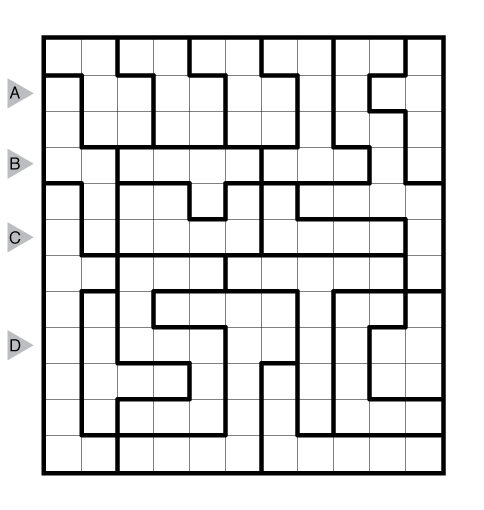 Serkan also continued sharing great puzzles including his original creation Tapa. This particular Two-focused Tapa puzzle that closed out a week with a lot of two-clue Tapa puzzles was one of our best shading puzzles of 2018. 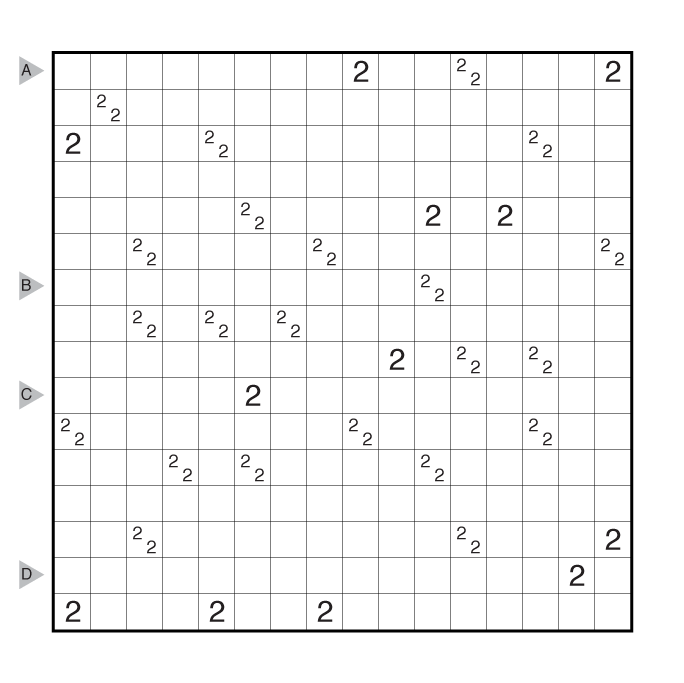 (view directly for a larger image)

This Outside Nanro by Carl Worth was a really fresh variation with a good solving path and earned recognition as well.

However, our best shading puzzle comes from Prasanna Seshadri with another take on the idea of Tapa and Two. Only in this “Twopa” it is that the given grid can lead to two specific answers if none of the clues have repeated shading around them. 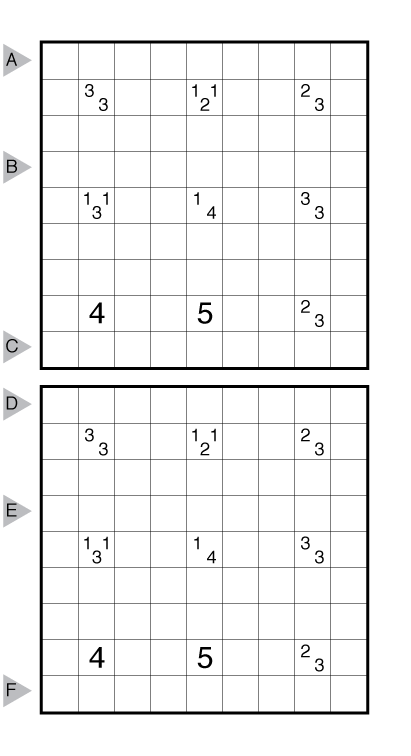 Below you will find a set of links to every weekly PDF file we’ve posted here, at least up to our last update of this page.

While all of the last posts had easily defined categories, we did have a few puzzles this past year that went well outside of the box. We wanted to give them some recognition as our Best of 2013 comes to a close.

First, our reward for “Best Puzzle Response” has to go to Craig Kasper for one of his Sunday Surprises. After Grant Fikes posted a Doctor Who-themed “Seek and Spell Sudoku”, Craig put together a quite appropriate and humorous retort from the Daleks. It was certainly one of our more memorable jokes of the year. 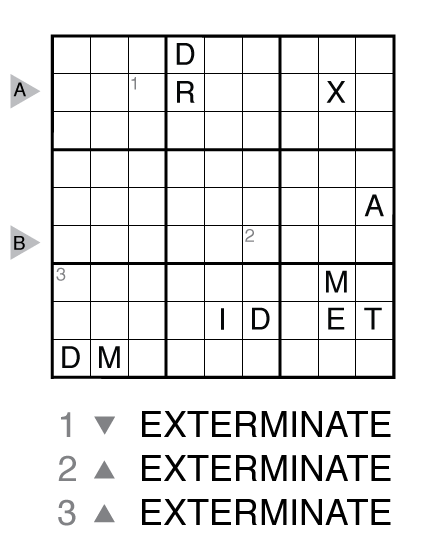 “Best Repeat” has to go to Grant’s LITS + Double Back puzzle from July. While it scored ok in each category, that it actually worked as two kinds of puzzle made it something we didn’t mind posting twice. We’ll try to double back on Double Back puzzles later this year. 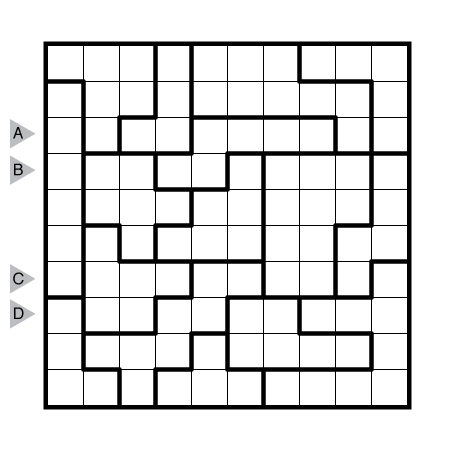 Finally, “Best Surprise” was clearly won by Dr. Sudoku’s April 1st Word Search puzzle. If you haven’t tried it yet, you really should without any spoilers so we won’t say anything more except our readers thought it was awesome. 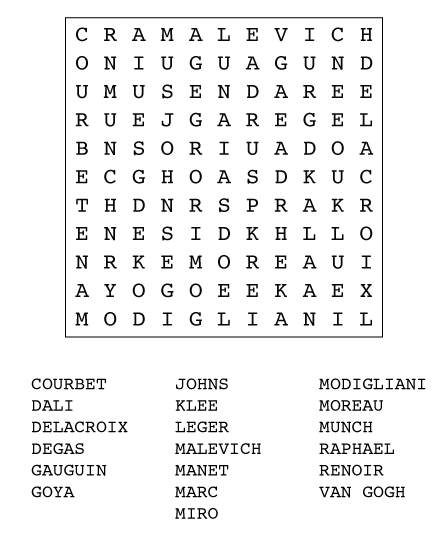 2013 was an incredible year for us. Many years ago Wei-Hwa Huang and I came up with a dream to build a daily puzzle site. While we never had the time to get it off the ground then, Grandmaster Puzzles is now a clear destination site for logic puzzle fans around the world. We currently have five regular authors and one more on the way starting tomorrow. In 2014 we hope to have a few more guest authors appear here and there. There will also be a few format changes to make the site more accessible to newcomers, which you’ll notice in the coming weeks. One of the larger ones is that we will have a return to having some focused weeks where a particular puzzle type will be highlighted.

One big change in 2014 is that we will plan to put out regular PDF “Puzzle Packs” for sale every month. Our long awaited “The Art of Puzzles” will actually be released first as five separate puzzle packs currently planned to start at the end of this month, with a Tapa and Nurikabe collection, and then two more in February, and the last two in March. The complete set will then be published as a print-on-demand book for solvers who’d prefer a hard copy. After that we have a few different sudoku and other puzzle packs in the works — some from individual authors and others from a mix of contributors. I don’t know if I can meet my New Year’s Resolution of getting one out each month in 2014, but with more help on the site now we should be able to get close.

I’ll close this post with some solving stats from the first year. We posted 322 puzzles and actually had several solvers complete them all (or come very close). At 99+% completion when we last checked were lukabear, achan1058, muhorka, kiwijam, Projectyl, sknight, sworls, JooMY, and FoxFireX, while migross76, uvo, Alien, and sfcorgi were quite close. These are clearly our top fans for the year! Once we have a nice prize to raffle off we will give something out to at least one of these frequent solvers. We had 30 solvers register solutions to at least 200 puzzles and in total had over 15,000 correct answers this year. (Many visitors just download the puzzles and don’t track their answers on the webpage, but to make our leaderboard you’ll need to submit.)

Our most solved puzzle is surprisingly our very first prescription, Dr. Sudoku Prescribes #1, which had the benefit of lots of direct links in January and has slowly been gaining finishers throughout the year. With so many puzzles now, a lot of solvers have certainly put some of these on their “backlog”. In terms of web traffic, we outgrew our first server set-up by the midyear, but have been stable and on-line consistently since then after a change of hosts/servers. I hope we continue steady growth in 2014 without needing to again rebuild things.

Most important to me, we had 0 broken puzzles for the whole year; every single one had just one solution. Some of the credit for this goes to our authors who are diligent about their submissions, but some thanks must also go to our many test-solvers for double- and triple-checking. There are a few computer-generated puzzle makers that write things like “our automatic process guarantees no broken puzzles” as if this is some unique benefit of their process. Proper development, editing, and testing can be done with more elegant hand-crafted puzzles too. While we might eventually make an error once in a blue moon, our solvers should consider our puzzles quite reliable.

As always, we appreciate your input on what you’d like to see here, and we thank you for your readership over the year.

I’m sure many of you were expecting ANOTHER version of the Christmas Tree puzzle from the last two weeks. I mean, I did get a very nice Double Back from Robert Vollmert (which cannot be confused as a Star Battle or a LITS). But posting such a puzzle wouldn’t be a surprise.

No, today’s Sunday Surprise comes from the pile of submissions I’ve received over the year from Hans van Stippent, who played with the usual rules of Skyscrapers a bit by hiding some of the cells from consideration. It yielded a very interesting puzzle which is Hans’ gift to you this Sunday. 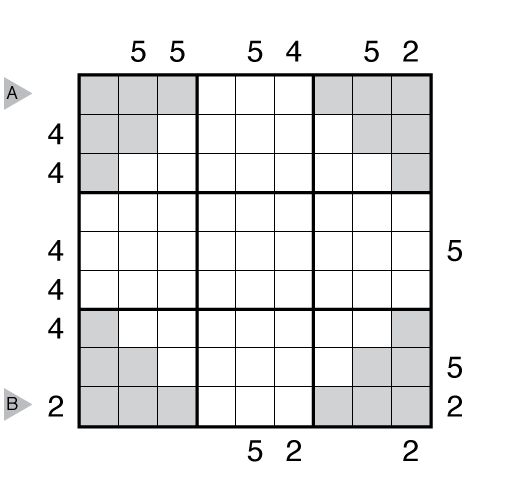 Rules: Standard Sudoku rules. Also, standard Skyscrapers rules. Additionally, the cells in gray are “underground” and cannot be seen for any of the outside skyscraper clues (think of them as starting with a negative sign if necessary). As an example, the 4 in row 2 refers only to seeing four buildings in columns 3 through 7, even if there is a 9 in column 1 or column 2 as that 9 cannot be seen.